Graduated in 2008 with a double-major in Performance and Music Business.  Principal Instrument:  Guitar.

Overview:  Graduating during the worst job market in decades, Charlie moved back home (Washington State).  He made a living doing three jobs:  gigging and local touring with bands, working at Best Buy selling cell phones (for near minimum wage) and helping at his brother’s funeral home.  During his almost-3 years at Best Buy he became friendly with the product vendors.  One day he asked one of them about their job.  She described a job to his liking put in the good word for him, which got him an interview.  He was hired to to product vending/support part time, and was promoted to his full-time position within a year.

You can see his LinkedIn profile here.

Choice Quotes: “I made a really good decision by focusing on the business aspect (of music).  I think some of those business classes should be required.”

“Networking and relationship building is what it really boils down to–at least in this field–for us in the corporate environment.  There are plenty of opportunities that students at Berklee can seize to do (and learn) this naturally…You’re putting together bands with people you see in the hall, doing different projects, etc.”

Charlie (on the left) during his Berklee days, doing what Performance majors do best 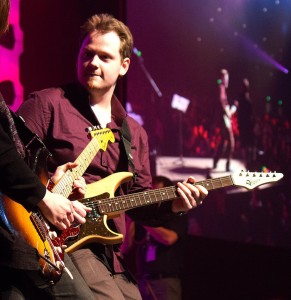 Music remains part of Charlie’s life to this day.  He continues both to play, built a recording studio in his home where he works with local bands, and is partnering with a guitar store to provide lessons.

2015:  Charlie has climbed out of the valley, and points triumphantly at the even higher peaks he intends to climb–an excellent metaphor for his post-Berklee career!

Kevin Block-Schwenk is an Associate Professor of Liberal Arts (Economics) at Berklee College of Music in Boston.

Index of Other Successful Berklee Grads

Subscribe to my email updates to keep up with the latest Cool by Osmosis posts. Enter your email address and check the categories you want to know about.